Researchers at the Brown University Superfund Research Program (SRP) Center have developed a new 3D liver cell model that can be used to screen chemicals for toxicity in fish. The new model uses fish liver cells cultured to form 3D microtissue, so researchers can assess liver toxicants over time and after single and repeated exposures. According to the authors, the fish-specific testing platform is an alternative to expensive, time-consuming, whole animal assays and is suitable for screening the potential adverse effects of environmental pollutant mixtures and newly identified contaminants.

Toxicity testing is used to make predictions about whether a chemical is potentially harmful to animals, as well as humans. Often, toxicity tests are conducted on whole animals, but it can take a great deal of time, money, and animals to do these tests. As an alternative, researchers can conduct an initial screening on cells from a few organs that are particularly sensitive or vulnerable.

Compared to a single layer of cells often used in toxicology, 3D liver microtissues live longer and are better differentiated, meaning they act more like real livers and can better predict the response of fish. This cell-based method provides a bridge between conventional single layer cell assays and whole animal toxicity studies. 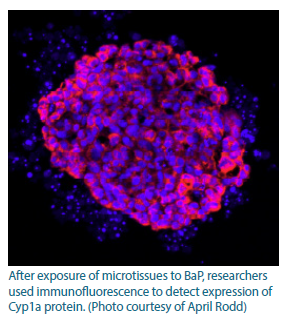 To test the response of the microtissue model to BaP exposure, researchers measured levels of the enzyme cytochrome P450 1A (Cyp1a), which is a biological marker of toxicant exposure and cellular response. Like other organic pollutants, BaP is metabolized by Cyp1a and other enzymes to make it easier for the body to excrete the compound. However, these resulting reactive metabolites can cause greater damage than the parent compound, leading to oxidative stress and DNA damage. Even at low levels, BaP is a known potent inducer of the enzyme Cyp1a.

Using assays to measure Cyp1a gene and protein expression, the researchers demonstrated that the 3D model is sensitive to BaP. They detected induction of Cyp1a by measuring gene expression after 24 hours of exposure at concentrations of BaP as low as 1 nanomole per liter, comparable to what may be found in the environment.

In addition to measuring gene expression, they also used immunofluorescence to detect and visualize the location of Cyp1a protein within the microtissue. Immunofluorescence showed that the highest levels of Cyp1a were at the periphery, with lower levels in the cells in the center. Unlike single layers of cells, which are exposed more directly, the 3D microtissue’s multilayered structure more closely mimics a fish’s liver by acting as a barrier to toxicant transport.

Cell death followed the same gradient as Cyp1a levels in the microtissue, with higher cell death in the periphery. According to the authors, this implies that the cells with the greatest adaptive response, as indicated by induction of Cyp1a, are also the cells experiencing the greatest toxicity. After the exposure period, the researchers observed a decline in Cyp1a expression. They also performed repeated exposures, which showed that Cyp1a levels in response to a second exposure were comparable to the first exposure.

The researchers found that the microtissues maintained viability and differentiation for at least 8 days. They observed that this type of 3D cell culture encourages cells to act more like tissues in the body and keeps cells alive longer, which allows adverse effects to be followed over an extended exposure period or even after the exposure is over. 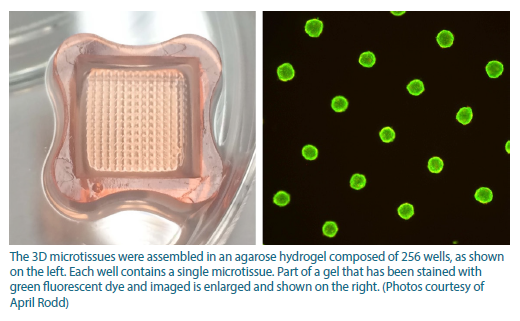