Poplar trees can capture and remove trichloroethylene (TCE) from the soil and degrade it. Now, a method using endophytes, symbiotic microbes that live within a plant, has been successfully shown to boost the speed and effectiveness of this natural degradation process. 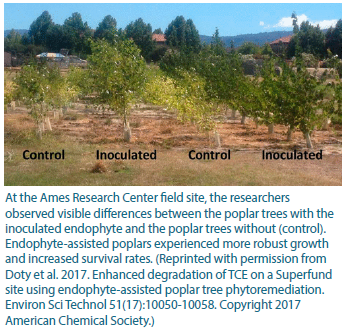 Researchers led by Edenspace Systems Corporation, a Superfund Research Program (SRP)-funded small business, conducted the first large-scale experiment on a Superfund site using poplar trees fortified with a microbial endophyte to clean up TCE-contaminated groundwater. TCE is a known human carcinogen that is widely used as a metal degreasing agent and has been found in groundwater at many military and Superfund sites.

After inoculating poplar trees with a specific endophyte strain, the researchers successfully showed that the endophyte-assisted poplars quickly and effectively removed TCE, decreasing concentrations in groundwater from 300 to 5 micrograms per liter.

According to the researchers led by Michael Blaylock, Ph.D., this method offers a readily deployable, cost-effective, and sustainable approach to degrade TCE and has the potential to make a huge impact on Superfund and other hazardous waste sites with TCE-contaminated groundwater. Endophytes live within the plant and, therefore, are expected to persist in the trees at the site, continuing to degrade TCE as long as their host plant survives.

Moving from the lab to the field

The strain of bacteria used in the new research was isolated by Sharon Doty, Ph.D., professor at the University of Washington and partner on the small business project. It was taken from poplar trees exhibiting high rates of TCE degradation on sites with TCE contamination. The first phase of the small business grant demonstrated the ability of this bacterial endophyte to persist in the poplar trees and significantly enhance degradation of TCE compared to poplars without the bacteria.

In the new work, the researchers tested the ability of poplar trees inoculated with microbes to clean groundwater from the Middlefield-Ellis-Whisman Superfund research area in California's Silicon Valley after it had flowed into the NASA Research Park at NASA's Ames Research Center. At the Ames Research Center, the researchers planted rows of young poplar trees — some inoculated with the specific microbe, and others without — on a field above a known groundwater plume contaminated with TCE.

The researchers found that TCE concentration decreased from 300 micrograms per liter upstream of the planted area to less than 5 micrograms per liter downstream from the test site. They also found evidence of a 50 percent increase in chloride in the soil around the poplar roots. Chloride is a harmless, naturally occurring element that remains after TCE is degraded by the bacteria inside the trees.

When trees take up and degrade chemicals, it often leads to stunted tree growth and withering leaves and can sometimes cause the plant to die. But, in this case, the trees degrading TCE that received the microbe were bigger and healthier, exhibiting a 32 percent increase in trunk diameter compared to poplar trees without inoculation of the endophyte. After three years, tree trunk samples also revealed greatly reduced levels of TCE inside the inoculated trees.

In the 1990s, SRP-funded researchers led by Milt Gordon, Ph.D., pioneered the use of hybrid poplar trees to remove TCE and other chlorinated contaminants from groundwater. Their research was the first to show conclusively that plants are capable of the types of degradation of toxic compounds that was formerly seen primarily with microorganisms.

SRP-funded researchers, including Doty, later went on to develop and successfully field test transgenic poplar plants that could remove TCE at much faster rates. But, according to the authors, significant regulatory and breeding hurdles have prevented large-scale use of this technology.

The endophyte-assisted technology provides a simpler and cheaper approach that does not require special poplar breeding and can be introduced more quickly. The field trial demonstrates the effectiveness of this natural TCE-degrading endophyte strain, which was successfully shown to improve tree growth and pollutant degradation.