Research Brief 275: Activated Carbon Reduces the Effects of TCDD on the Immune System and Gut Microbiome in a Mammalian Model

Activated carbon is produced when materials with high carbon concentrations, such as coal or wood, undergo special treatment that expose them to extremely high temperatures without burning them. The result is a porous substance that can bind with other carbon-containing chemicals. Previous studies have shown that activated carbon can sequester dioxins in the environment and reduce their bioavailability to aquatic invertebrates, or the fraction of the chemical that can be taken up by organisms. For the first time, these studies provide direct evidence that activated carbon also reduces dioxin availability to mammals.

In one study, MSU SRP Center researchers led by Stephen Boyd, Ph.D., show that when mice ingest 2,3,7,8-tetrachlorodibenzo-p-dioxin (TCDD) absorbed to activated carbon, the TCDD is no longer toxic to them.

Today people are exposed to dioxins primarily by eating food, particularly animal products, contaminated by these chemicals. The dioxin TCDD is a known cancer-causing agent in humans that has also been linked to type 2 diabetes, an acne-like skin disease, damage to the immune system, developmental problems in children, and infertility problems in adults.

They observed CYP1A1 activation and immune response suppression in mice given TCDD without activated carbon. The responses were not observed when the researchers gave the mice an equivalent amount of TCDD absorbed to activated carbon. According to the authors, this provides the first direct evidence that activated carbon can sequester TCDD in a form that is not bioavailable to mammals.

Examining Shifts to the Gut Microbiome 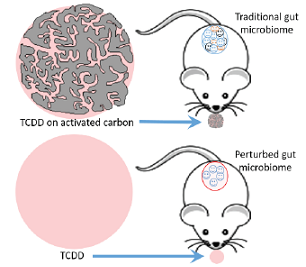 The researchers found that when TCDD was administered on activated carbon, they did not see the gut microbiome perturbations that they observed when they administered TCDD alone. (Photo courtesy of Robert Stedtfeld)

In mice administered TCDD alone, they saw an increase in segmented filamentous bacteria, which has been seen in previous studies with TCDD-induced host toxicity. This response was not seen when TCDD was sequestered by activated carbon.

Current methods for removing dioxins from contaminated soil and sediment often require dredging, an expensive and time-consuming method to remove the contaminated soil, followed by disposal in landfills. According to the authors, these findings support the use of activated carbon as a low-cost ecosystem-friendly way to reduce dioxin’s bioavailability in soils, sediments, and surface waters.