Researchers at the University of Tennessee have discovered a crucial compound that helps specific bacteria degrade pollutants like tetrachloroethene (PCE). This compound, called purinyl-cobamide, assists enzymes during degradation reactions.

Researchers identified purinyl-cobamide in a study led by Superfund Research Program grantee Frank Loeffler, Ph.D. These helper molecules are part of a larger group of chemical structures known as cobamides. A majority of organisms, including humans, require cobamides for normal functioning. Vitamin B12 is the best-known member of this group of helper molecules.

The researchers previously discovered that changes to the lower base structure of cobamides influence the bioremediation efficiency of the bacterium Dehalococcoides mccartyi, a key organism for in situ treatment of toxic chlorinated compounds. They found that minor structural differences in the lower base affected whether degradation of PCE stopped at vinyl chloride, a carcinogen, or proceeded all the way to non-toxic ethene. Since Dehalococcoides cannot synthesize its own helper molecules, the findings emphasize the importance of understanding how other microorganisms interact with Dehalococcoides and enable efficient detoxification.

Building on this work, they investigated the structure of the helper molecules involved when a different type of bacterium, Desulfitobacterium hafniense, partially degrades PCE. Combining cultivation and sophisticated analytical techniques, they found that Desulfitobacterium uses unsubstituted purine to build a functional cobamide that enables PCE degradation. Interestingly, the Desulfitobacterium cobamide does not support Dehalococcoides dechlorination activity, and knowledge and availability of the correct lower base type is crucial to sustain the activity of bacteria involved in priority pollutant detoxification. 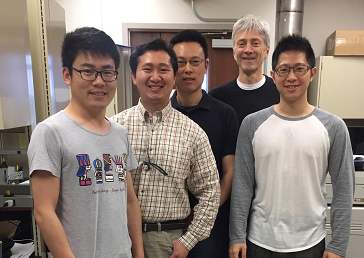 This study further demonstrates that the type of lower base in the cobamide structure plays an important role in the function of enzymes to speed up degradation of chlorinated compounds by bacteria. Understanding the biological and geochemical conditions that support the production of specific cobamides, which efficiently promote dechlorination to non-toxic end products, may lead to faster detoxification at contaminated waste sites, and can substantially reduce cleanup costs.

These findings also expand the diversity of naturally occurring cobamide structures and assign the first biological function to unsubstituted purine. Enzymes that depend on cobamides fulfill essential metabolic functions in most organisms, including mammals. As a result, a better understanding of how the lower base of the cobamide structure controls enzyme activity may be relevant to any natural and engineered microbiome, and even have implications for the progression of certain human diseases.