Researchers at the University of California, San Diego (UCSD) showed that chronic liver inflammation can promote cancer by suppressing one of the body’s natural mechanisms to fight cancer development. The study, funded in part by the Superfund Research Program (SRP), explains the success of some types of cancer immunotherapy and suggests novel targets for new therapies.

Inflammation is one way the liver responds to substances people are exposed to through pollution, diet, and other means. Chronic inflammation can drive many cancers, especially liver cancer, and researchers have long thought this was because the effects of inflammation both stimulate cancer cells to divide and protect them from cell death.

In the new study, scientists found that in the liver, chronic inflammation also suppresses a natural defense mechanism known as immunosurveillance. This mechanism involves cells in the immune system, known as cytotoxic T cells, that guard against disease agents such as viruses, bacteria, and cancerous and precancerous cells.

According to the authors, the results provide one of the strongest and most direct demonstrations that immunosurveillance actively prevents cancer emergence, while specific immune cells associated with chronic inflammation hamper this process. These findings could help scientists develop new ways to interfere with immunosuppressive lymphocytes to prevent or treat early liver cancer. 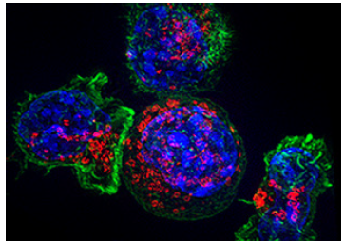 Cytotoxic T cells surround a cancer cell, center. The T cells attach and spread over the target, then use special chemicals housed in vesicles, red, to attack the cancer cells. Immunosuppresive lymphocytes interfere with the process. (Photo courtesy of National Institutes of Health)

Experiments in the new study showed that immunosuppressive lymphocytes use a molecule known as PD-L1 to interfere with cytotoxic T cells, leading to liver tumors in the chronically inflamed mice. By stopping the T cells, liver tumors formed and grew.

In mice lacking tumor-fighting cytotoxic T cells, 27 percent of 15 mice had large liver tumors at six months. Mice of the same age that retained their cytotoxic T cells had no tumors. Similarly, mice without immunosuppressive lymphocytes had almost no tumors even at 11 months, most likely because cytotoxic T cells could fight the emerging cancer.

When the researchers inhibited PD-L1 with a drug or by genetic engineering, cytotoxic T cells were re-invigorated and cleared the tumors.

According to the authors, these findings provide an explanation for the ability of anti-PD-L1 drugs, which block the receptor for PD-L1, to induce liver cancer regression in a recent clinical trial.

Moving forward, the research team is investigating how immunosuppressive lymphocytes are recruited to the liver. Finding a way to interfere with the recruitment or generation of these cells may provide a new approach to prevent or treat liver cancer.