New research demonstrates the important function of the aryl hydrocarbon receptor (AHR) in normal organ development, reproduction, fertility, and behavior. The results of the study, out of the Oregon State University Superfund Research Program Center (OSU SRP Center), may help researchers understand the target organs and molecular mechanisms involved in toxicity to environmental contaminants that require AHR, a protein required for organisms to develop properly.

Because AHR is a highly conserved receptor in humans and zebrafish, zebrafish can be used to rapidly study key biological functions of the AHR with and without exposure to environmental contaminants. Led by Robert Tanguay, Ph.D., the OSU SRP Center research team generated AHR2-null zebrafish, meaning that they lack AHR, using CRISPR Cas9 genome editing. These fish were compared to normal, or wild-type, fish early in development, during adulthood, and during reproductive maturity. 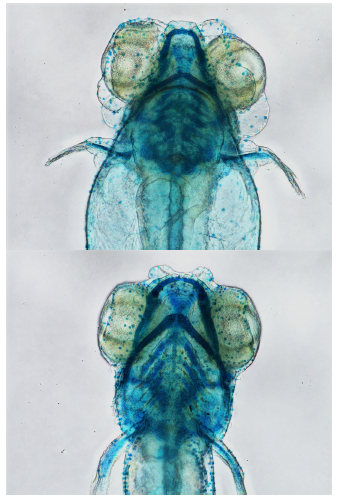 AHR is known to be disrupted by many different environmental contaminants, including dioxins, biphenyls, and polycyclic aromatic hydrocarbons. Even at low levels, these exposures can inappropriately activate AHR and disrupt neurological and cognitive development. The researchers further investigated this by comparing the response of AHR2-null and wild-type zebrafish to 2,3,7,8-tetrachlorodibenzo-p-dioxin (TCDD) exposure.

As expected, TCDD exposure led to permanent cartilage abnormalities in wild-type fish early in development. These included changes in the eye, jaw, snout, trunk, and fins. Wild-type fish also had alterations in the yolk sac. AHR2-null zebrafish had normal cartilage even though they were exposed to TCDD. According to the authors, these findings suggest that TCDD requires functional AHRs to produce toxicity in zebrafish.

To understand the role of AHR in normal physical development without environmental insult, the team compared cartilage around the skull and face early in development and in adult fish with and without AHR. Early in life, no differences were observed between AHR2-null and wild-type fish. These findings suggest that AHR2 is not required for early development of cartilage around the skull and face, but the absence of AHR2 protects the fish from TCDD-induced malformations, according to the authors.

In adults, AHR2-null fish had more visible jaw malformations than wild-type fish. They also had more fin defects, as well as significant skeletal defects. Interestingly, these malformations appeared to be more pronounced in females than in males. The authors stated that these results confirmed their earlier research findings that AHR2 is required for proper skeletal development in adult zebrafish.

AHR in Reproduction and Fertility

The researchers further investigated these findings by examining fish ovary tissue. Compared to wild-type fish, female AHR2-null fish had more immature and degenerative follicles and fewer mature follicles. According to the authors, these finding suggest that AHR2 plays an important role in normal female reproduction by promoting proper follicle development. 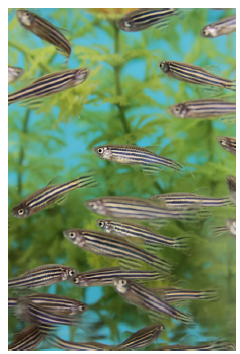 The researchers also investigated the functional role of AHR2 on movement and behavior early in development by using a light-dark photomotor response assay and in adults by using startle-response, predator avoidance, and social cohesion assays.

They found that AHR2-null larvae had significantly hyperactive responses to light stimulus compared to wild-type fish. In adults, anxiety-related behaviors were reduced in AHR2-null fish compared to wild-type fish. They were less reactive to a startle stimulus and to a predator stimulus. Interestingly, adult AHR2-null fish also spent more time near a video projection of a school of free-swimming zebrafish in the social cohesion assay. These findings suggest that AHR2 is involved in proper neuromuscular or sensory system development, which can be observed into adulthood, according to the authors.