Research Brief 282: Dust from Mine Waste in Navajo Nation May Harm Lungs and Heart 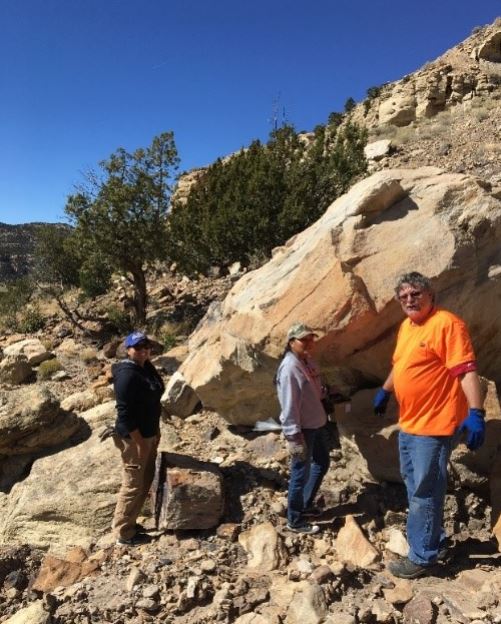 Particles in dust from abandoned uranium mines may be damaging to the lungs and heart, according to new research from the University of New Mexico Superfund Research Program (UNM SRP) Center. The researchers showed that exposure to particles less than 10 micrometers in diameter (PM10) from an old uranium mine, compared to PM10 from an area not impacted by a mine, led to increased pulmonary and cardiac toxicity in mice, as well as higher levels of inflammation and oxidative stress in cells.

With funding from SRP and another NIEHS grant, researchers led by Matthew Campen, Ph.D., focused on PM10 arising from one of more than 500 abandoned uranium mine sites in the Navajo Nation. They took dust samples from the Claim 28 mine site in the Blue Gap Tachee Chapter of the Navajo Nation to study the stucture and toxicity of the particles. They also took dust samples from a nearby area, which is not impacted by historical mining activities, to serve as background PM10 for comparison.

They discovered that the PM10 derived from the mine, called Claim 28 PM10, was highly enriched with uranium and vanadium. These two metals have been previously linked to negative health effects. The Claim 28 PM10 also exhibited a unique structure consisting of aggregated uranium- and vanadium-bearing nanoparticles, which was not seen in the background PM10. 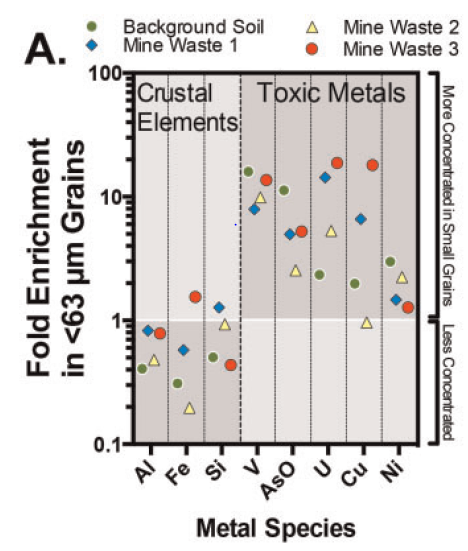 The researchers characterized elements in the samples and found that particles less than 63 micrometers in size, compared to larger particles in the samples, displayed higher concentrations of toxic metals, including uranium and vanadium. (Image from Zychowski et al., 2018, Respirable uranyl-vanadate containing particulate matter derived from a legacy uranium mine site exhibits potentiated cardiopulmonary toxicity, Toxicol Sci, by permission of Oxford University Press)

To determine whether the Claim 28 PM10 was more toxic than background PM10, researchers exposed mice to both types of particles. They found that Claim 28 PM10 led to increased pulmonary inflammation relative to background PM10. They also observed greater vascular toxicity in Claim 28 PM10-exposed mice, as measured by heightened constriction of the aorta, the largest artery in the body.

They also found that human cells exposed to Claim 28 PM10 led to higher rates of cell death and impairement of phagocytosis, an immune system mechanism used to remove pathogens and cell debris. Claim 28 PM10 was also associated with higher oxidative stress responses in cells. Further study of the cell responses revealed that cell death and injury by Claim 28 PM10 exposure was driven primarily by pathways responsible for activating inflammatory responses.

When examining uranium and vanadium from the samples, they found that both metals produced immune responses in the lung, although with different patterns of cytokines. Cytokines are chemical communicators released by cells of the immune system that may indicate different inflammatory responses. Uranium induced a classic inflammatory pattern of cytokines associated with the innate immune system, which included the cytokines interleukin [IL]-1β and tumor necrosis factor-α. On the other hand, vanadium induced a cytokine pattern more consistent with a TH2-like response, which is associated with controlling allergic inflammatory responses.

Delving into the structural differences of the PM10, they found that Claim 28 mine waste appeared to include carnotite ore, a mineral containing uranium and vanadium. In the samples, these carnotite grains often existed as aggregated nanoparticles. Because nanometer-sized particulates can penetrate deeper into the lung, these structures may be linked to increased toxicity.

Implications for Nearby Residents

After their discoveries regarding the potential health effects of mine waste dust, the researchers have gone out into the field to validate their findings. Their mobile exposure lab, on loan from Jack Harkema, Ph.D., and Jim Wagner, Ph.D., at Michigan State University, is on site in Blue Gap Tachee to measure the movement of Claim 28 PM10. (Photo courtesy of Matthew Campen))

According to the authors, a limitation of these studies is their use of high doses of PM10, which are not directly relevant to human exposures but provide a way to directly compare the potency of dusts from mine waste and background samples.

Moving forward, the researchers are validating the findings on-site in Blue Gap Tachee. They are analyzing how much of the contaminated dust may be traveling to community members in the region. They also are examining potential health effects of inhalation exposures on nearby Navajo communities.

The authors added that although they expect the overall exposure of windblown PM10 to be low in nearby communities, many of the local residents within a few kilometers of mine sites have lived in their homes for several decades. This emphasizes the need to assess exposure over time to gauge the regional health risks imparted by abandoned mine waste sites.

In addition to SRP funding, this research was funded by NIEHS grant R01ES026673.