New research out of the University of California, San Diego (UCSD) Superfund Research Program (SRP) Center explains how liver cells with DNA damage manage to survive and divide, fueling liver cancer. The study highlights the importance of a family of molecules called CD44 proteins, which are located on the surface of cells. The UCSD investigators found that CD44 allows cells to override the body’s natural protective response to DNA damage. The findings point to potential targets for tumor prevention and therapy, according to lead author Michael Karin, Ph.D., and first author Debanjan Dhar, Ph.D. 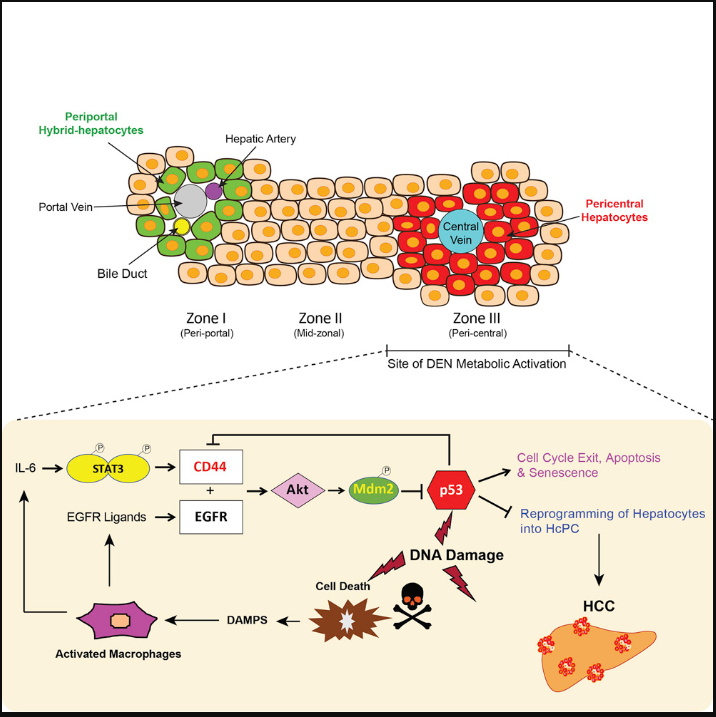 When DNA damage occurs, a tumor suppressor protein called p53 is normally activated. p53 stops the cell from dividing, triggers cell death, and prevents mutations caused by DNA damage from spreading. Without this protective response, damaged cells continue to divide, accumulating mutations and leading to cancer. To understand the underlying mechanism of this process, the researchers looked at liver cells in mice, as well as samples from humans.

Role of CD44 in Tumor Initiation

The team studied two different mouse models to explore the role of CD44 in the initiation of a specific form of liver cancer called hepatocellular carcinoma (HCC). The first mouse model had been genetically modified to be more prone to spontaneous HCC. The second had been exposed to environmental toxicants known to induce HCC.

The study team validated these findings using a publicly available database of human HCC and normal liver tissue. They found that CD44 was expressed only in HCC cases and not in healthy, functional liver cells. Interestingly, this finding was consistent in HCC cases across geographic regions and in cases caused by different factors, like hepatitis C virus and alcohol consumption.

Legend has it that two wolves, the evil and the good, always fight within us, and the one we feed eventually wins. The artwork depicts the two wolves in a yin-yang balance of inseparable opposition. DNA damage leads to p53 response (the guardian, white wolf), that prevents tumor development. However, the inflammatory microenvironment feeds the black wolf (CD44) by inducing its expression that eventually terminates the p53 response and promotes tumor development. (Illustration by Samit Kumar Dutta)

Using both young and adult mice, the researchers explored the activity of p53 in response to a DNA-damaging toxicant. In younger mice exposed to lower toxicant doses, p53 typically stopped cells from dividing. At the higher toxicant doses used in adult mice, p53 activation generally led to cell death.

Next, the team compared mice that possessed or lacked CD44. They found that while CD44 status does not affect whether the p53 response occurs, it does control what happens to the cell when the p53 response ends. In mice with CD44, p53 became inactive or was not present two to three days after toxicant exposure. In contrast, mice lacking CD44 still had active p53 detected in liver cells several days after exposure. The results indicate that CD44 is important in turning off the p53 response and avoiding cell death that normally would occur in response to DNA damage.

A Target for Treatment and Prevention

The authors present CD44 induction as a newly identified early step in HCC initiation. Therefore, the team sought to identify factors that might control CD44 expression and thus may act as potential targets for therapy or prevention.

They found that a transcription factor called STAT3, part of a group involved in many aspects of cellular immunity, apoptosis, and proliferation, regulates CD44 expression in liver cells in mice. The team also found that inhibiting an enzyme responsible for STAT3 activation reduced the levels of STAT3 and CD44 in mouse liver cells.

The researchers also looked at human tumor samples from HCC patients and found that CD44 was increased in cells with a genetic mutation that increased the presence of the cytokine interleukin 6 (IL-6), which is known to activate STAT3 and induce CD44.

According to the authors, these results suggest multiple potential targets for tumor prevention and treatment in the liver, as well as in other organs.