Scientists estimate that hundreds of million pounds of polychlorinated biphenyls (PCBs) have been released into the environment as the result of improper disposal practices and accidental releases. This is a significant environmental problem because PCBs are chemically and thermally stable and complex PCB mixtures generally are resistant to biodegradation. The EPA has clear evidence that PCBs have significant toxic effects in animals, including effects on the immune system, the reproductive system, the nervous system, and the endocrine system. These chemicals pose a special risk to the health of children.

Contamination with complex mixtures of PCBs has been found throughout the global ecosystem at relatively low concentrations and at much higher concentrations at specific locations, often in soils and sediments. As illustrated by the estimated $460 million cost of the five year project required for the General Electric Company to dredge PCB-tainted sediments from the Hudson riverbed, conventional PCB remediation methods are both expensive and time-consuming. Scientists supported by the Superfund Basic Research Program are investigating microbial processes that could be applied to the bioremediation of soils and sediments contaminated with PCBs. 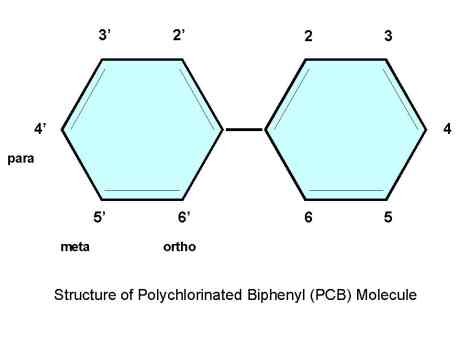 A PCB is a molecule consisting of a biphenyl nucleus with chlorine at any or all of the 10 available sites - 209 different PCB congeners are theoretically possible. Although numerous biphenyl-degrading microbes are known, high numbers of chlorine substituents typically prevent aerobic microbial enzymes from attacking the aromatic rings of PCBs. Yet anaerobic microbial communities were discovered that possess reductive dechlorination activity which replaces some of the chlorines on the biphenyl rings with hydrogen, leaving the biphenyl rings intact. The resulting partially dechlorinated PCBs are more susceptible to aerobic co-metabolism via ring opening, and chemical oxidation. Moreover, genetically enhanced microbes can be constructed to reclaim these PCBs into the global carbon cycle via their mineralization. Thus, the enhanced (bioaugmented) sequential anaerobic-aerobic treatment could result in the complete destruction of even complex PCB mixtures (Aroclors) and is potentially the most promising approach for bioremediation of PCB contaminated soils and sediments.

A team of interdisciplinary researchers at Michigan State University (MSU) is examining aspects of both the anaerobic and aerobic phases of this process, working to find information that can be used to overcome factors limiting the implementation of sequential anaerobic-aerobic biotreatment technologies. For example, naturally occurring anaerobic dechlorination of PCBs is generally incomplete. Building on a previous work, the MSU researchers are studying the effectiveness of iron sulfate (FeSO4) amendments to stimulate dechlorination of different PCB mixtures which may be found at Superfund sites. FeSO4 is inexpensive and innocuous, and this technique has great potential to yield the maximum extent of dechlorination, which is crucial for the following aerobic PCB reclamation.

Two distinct issues must be addressed with respect to maximizing the potential of the aerobic phase of PCB biodegradation. First, it is important to identify the persistent intermediates that accumulate during aerobic degradation and to estimate their potential toxicity. Second, research is needed to develop microbial systems that are capable of thriving in contaminated sediments and able to mineralize complex PCB mixtures thus preventing accumulation and release into environment of the toxic intermediates.

The successful anaerobic dechlorination of PCB mixtures such as Aroclor results in lesser chlorinated biphenyls, dominated by congeners with chlorines in the ortho (2, 2', 6, and 6') and/or para (4 and 4') positions. The MSU scientists have examined the degradation of these PCBs by aerobic bacteria and found that the bacteria that attacked the ortho-chlorinated rings exhibited higher rates of degradation than those that attacked the para-chlorinated rings. The rates of degradation of the individual PCB congeners varied significantly depending on their initial concentrations and the composition of the PCB mixtures. Incomplete degradation resulted in the formation of an intermediate compound (Cl-HOPDA) that can be converted to toxic chlorinated polymers and chlorophenols. No mineralization occurred with chlorobenzoate accumulating as a dead-end product.

The aerobic stage of the sequential PCB degradation scheme is restricted by the limited ability of aerobic biphenyl degraders to thrive in PCB-contaminated soil and/or to completely metabolize the PCBs. This is often because the microbes either do not have a mechanism to use CBA for growth or have a CBA metabolic pathway that forms products toxic to the microbe. To address these challenges, the MSU scientists discovered specific CBA dehalogenases and demonstrated that these genes can be used for a simple, single-step upgrade of the existing microbes to yield PCB mineralization pathways. They introduced plasmids containing the para-CBA and ortho-CBA degradation genes into different biphenyl-degrading microbes. The recombinant bacteria were then capable of completely mineralizing the respective para- and ortho-PCBs, as well as using complex PCB mixes for growth while preventing accumulation of potentially toxic intermediates (Cl-HOPDAs, CBAs). Most importantly, they successfully degraded PCBs in a nonsterile soil. This study is unique in that it applied genetic engineering techniques rather than intergeneric mating to develop the recombinant strain. In addition, while this project was designed to optimize PCB degradation, it also focused on the problems of intermediate formation and their influence on microbial population growth. This work represents a major step toward the goal of developing a practical bioremediation technology.

The intermediates formed during the aerobic degradation of PCB congeners must also be evaluated for their potential toxicity to humans. Certain monohydroxylated PCBs are potent endocrine disrupters and some PCB metabolites with a hydroxy group in the meta or para position have been reported to be involved in developmental neurotoxicity. The MSU researchers are conducting studies to assess the biochemistry of the metabolic steps resulting in the accumulation of intermediates. This information will be applied to the genetic construction of microbes designed to minimize the build-up of toxic intermediates.

The results of MSU research implicated that sequential anaerobic-aerobic treatment scheme could be a beneficial remediation technology. However, further research is needed to resolve remaining questions, for example how the degradative processes affect and are being affected by the metabolic networks in microbial communities. Recent developments in genomic sequencing and DNA microarray technology create opportunities for answering these questions at the metabolic, regulatory, community and populational levels. The MSU team is employing microarray techniques to understand complex processes involved in successful biodegradation within a microbial population, naturally occurring and/or engineered, by introduction of foreign members. Success in this direction will help determine the practicality of the emerging recombinant technologies for remediation of environmental hazards.

These projects advance our knowledge of the molecular, population, and environmental factors that impact the fate of PCBs at Superfund sites. Sequential PCB transformation at anaerobic-aerobic interfaces, especially in sediments and soils, represents the greatest promise for remediation of large areas of low-level PCB contamination.