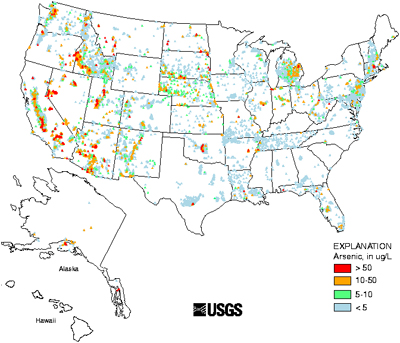 Arsenic is ubiquitous in the environment and ranks twentieth in abundance among the elements in the earth's crust. Arsenic is released into drinking water supplies by natural processes, such as the weathering of arsenic containing minerals, and through anthropogenic activities, such as mining and application of arsenic containing pesticides. The U.S. Geological Survey (USGS) has analyzed water samples from nearly 20,000 wells across the United States and determined that in 24% of the counties where data were available, at least 10% of samples had arsenic concentrations exceeding 10 micrograms per liter (mg/L). Refer to the USGS website for additional information.

The most commonly used method for removing arsenic in water treatment plants involves chemical precipitation using iron salts. This process requires large treatment basins for contacting the iron salts with the water. Therefore, it cannot be easily implemented without large capital expenditures and is impractical for small-scale treatment systems. The UAZ scientists are investigating a simpler and less costly method of removing arsenic via reaction with metallic iron filings.

The new method employs canisters packed with scrap iron filings that serve to filter arsenic from the water. The researchers are investigating the mechanisms controlling the removal process and determining how the removal efficiency depends on the water chemistry. They are also evaluating the long-term performance of the iron filters so that estimates of treatment costs can be made.

In well-oxygenated water and sediments, nearly all arsenic is present in the thermodynamically stable pentavalent state - arsenate or As(V). To date, the UAZ researchers have shown that the removal mechanism involves complex formation of arsenate with iron oxides. They determined that the binding of arsenate with the iron oxides serves as a removal mechanism as the iron oxides do not dissolve in the treated water. Electrochemical experiments have shown that sustained performance of the filings for arsenic removal is dependent on sustained iron corrosion. The electrochemistry studies also showed that the arsenic compounds do not oxidize the iron, but rather decrease its corrosion rate. The UAZ team conducted X-ray absorption spectroscopy (XAS) studies and showed that the iron becomes coated with magnetite and another Fe(II)/Fe(III) iron oxide phase. These mixed valent oxide phases are not passivating (i.e., they do reduce the chemical reactivity of the metal surface) and permit sustained iron corrosion and continuous generation of new sites for As(V) adsorption. The XAS results also showed that was no measurable reduction of As(V) to As(III) (arsenite). This is important because at drinking water pH values, arsenite is not bound as strongly to iron oxides as arsenate.

The UAZ scientists operated column reactors consisting of packed beds of iron filings for more than 1 year of continuous use. These studies validated the long-term performance of the iron media for arsenate removal. For all environmentally relevant concentrations of arsenic (i.e., <5,000 mg/L), the canisters removed arsenate to below the detection limit of 1 mg/L. The researchers determined that the kinetics of the arsenate removal process are sufficiently fast to be employed in both small and large-scale treatment systems using hydraulic residence times less than 1 minute. The research also indicates that freshly formed iron oxides have a greater adsorption capacity per unit mass than aged oxides. Therefore, the advantage of zero-valent iron over other iron oxide media may be that its corrosion continuously generates high specific surface area oxides that are more reactive than aged, crystalline materials.

These studies demonstrate the effectiveness of zero-valent iron filings for removing arsenate from aqueous solutions to levels below 1 mg/L. Canister treatment units packed with zero-valent iron filings are low cost, require no electric power, and require no operational supervision. This technology is therefore well suited for treating contaminated water in the United States as well as in developing nations such as Bangladesh, where arsenic contamination of drinking water is a major health issue. The knowledge gained from this research is essential for evaluating the applicability and limitations of zero-valent iron media for arsenic removal.