By definition, dense non-aqueous phase liquids (DNAPLs) are liquids that are heavier than water and have a low aqueous solubility. DNAPLs, such as creosotes, coal tar, and the chlorinated solvents perchloroethylene (PCE), trichloroethylene (TCE) and dichloroethylene (DCE), are the most frequent sources of contamination at Superfund sites. The main reasons for the high incidence rate and the magnitude of groundwater contamination by DNAPLs are: 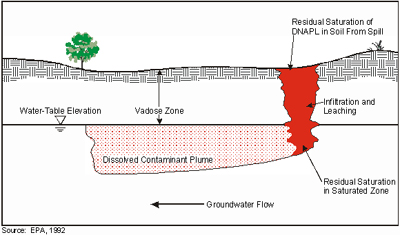 DNAPLs often contain compounds that cause a significant risk to human and ecological health. Once in the subsurface DNAPLs tend to migrate rapidly downward toward the bottom of the aquifer. A pool is formed when a migrating DNAPL is prevented from making further progress through the porous medium by an increase in capillary resistance. Because subsurface systems are heterogeneous, residual and pooled DNAPL typically has a complex morphological distribution, which makes remediation of such contamination a difficult challenge. In fact, the remediation of DNAPL-contaminated sites has proven to be one of the most difficult problems facing the Superfund program. Common remediation practices such as pump-and-treat, vapor extraction, gas stripping, and in situ biodegradation have been shown to be time-consuming, expensive and inefficient when applied to these sites.

SBRP-funded researchers at the University of North Carolina at Chapel Hill (UNC) continue to work towards the development and implementation of a novel class of methods for efficiently remediating certain DNAPL-contaminated subsurface systems. They have recently patented (1,2) the remediation methods described in Research Brief 61 and are currently developing improved methods to quantify and remediate DNAPL-contaminated Superfund sites.

In studies designed to increase our understanding of the relationship between site conditions and DNAPL pools, the UNC scientists performed a series of two- and three-dimensional experiments in heterogeneous porous medium systems. The remediation strategies studied involve the joint use of a dense brine barrier and controlled mobilization of trapped DNAPL using small-volume surfactant flushes.

The goal of the UNC research is to continue to develop and implement new approaches to remove DNAPLs from the subsurface. If these novel approaches are successful and put into practice, more economical means of contaminant source-zone remediation will be available, resulting in reduced risk to human and ecological populations. Such an advance would have a profound effect on the Superfund program and the restoration of DNAPL-contaminated sites.