Research Brief 86: Development of a Biomarker of Exposure to Benzene

Development of a Biomarker of Exposure to Benzene

Benzene is a ubiquitous environmental contaminant - it has been detected at over 800 Superfund sites. According to the EPA's Toxics Release Inventory, from 1987 to 1992 releases of benzene to water and land totaled over 2 million pounds - these releases were primarily from petroleum refining industries. Environmental contamination also occurs as the result of benzene emissions to air from chemical and manufacturing processes, from discharges into water from industrial effluents, and from combustion of most fuels. Individuals may be exposed to benzene by consuming contaminated water or by inhaling motor vehicle exhaust or evaporation at gasoline service stations. Tobacco smoke accounts for approximately 50 % of the public's exposure to benzene. 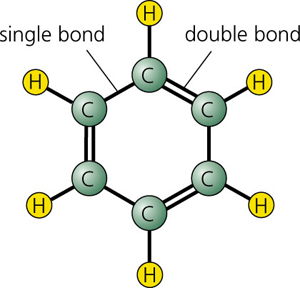 Benzene is both toxic and carcinogenic - there is strong evidence that it causes various types of leukemia and other blood diseases. Though scientists have studied benzene for over 100 years, much remains to be learned about the metabolism and mechanisms of carcinogenicity of this deceptively simple molecule. Scientists at the University of North Carolina, Chapel Hill (UNC) are conducting studies to develop and validate biomarkers of exposure to benzene with which to investigate exposure-response relationships in humans.

Following exposure, ~20% of benzene is exhaled in the breath (BB). The remaining ~80% is absorbed, metabolized, and may be excreted as a variety of urinary products, including phenolic compounds (i.e., phenol, hydroquinone, catechol and trihydroxybenzene), t,t-muconic acid (MA) and S-phenylmercapturic acid (SPMA), as well as unmetabolized urinary benzene (UB). Although the mechanism of benzene carcinogenicity is not known, it is thought to involve the actions of one or more metabolites, notably hydroquinone that is converted in the body to 1,4-benzoquinone.

Several biomarkers of exposure to benzene have been based on quantification of UB, BB, and various benzene metabolites in urine. Of these, measurements of benzene in urine and breath offer advantages of simplicity, sensitivity, and specificity over those involving urinary metabolites. Because UB and BB are derived exclusively from exposure to benzene, they are optimal short-term biomarkers of benzene exposure (benzene metabolites such as phenol, hydroquinone, catechol, or MA may be formed endogenously or derived from the diet).

The UNC researchers have developed simple and sensitive assays for UB and BB among occupationally exposed workers and the general public. Their system for measuring UB employs the head space solid-phase microextraction method, in which the headspace of a 0.5 mL urine sample is sampled with a polydimethylsiloxane fiber. The fiber is removed and thermally desorbed in the hot injector of a gas chromatograph for analysis via mass spectroscopy. The method for measuring BB is also quite simple; the subject merely exhales through a 75-mL glass vial, which is then capped prior to analysis. In the laboratory, benzene is transferred from the vial to an adsorbent tube, which is thermally desorbed and measured by gas chromatography with a photoionization detector. These methods can detect benzene exposures at 1 - 2 parts per billion (ppb).

The UNC team has used these methods to measure UB and BB in various populations. For example, BB has been investigated among benzene-exposed workers and unexposed controls in Shanghai, China. The UNC researchers' analysis of the relationships between benzene exposure, UB, and benzene metabolites provides insight regarding benzene metabolism. The data suggest that in more highly exposed individuals, benzene, phenol, and benzene oxide all compete for the same cytochrome P450 enzymes. This competitive inhibition reduces the proportions of the metabolites hydroquinone and MA, while increasing the proportions of phenol and catechol.

Benzene and its urinary products are eliminated rapidly. As a result, UB, BB and the urinary metabolites can only serve as biomarkers for approximately 24 hours following exposure. To investigate exposures over longer periods of time, the UNC researchers quantified adducts of the benzene metabolites benzene oxide (BO) and 1,4-benzoquinone (1,4-BQ) with serum albumin (Alb) among benzene-exposed workers and controls in China. (An adduct is the reaction product that forms when a chemical binds to a molecule such as DNA or a protein.) Because serum Alb typically has a half life of 21 days in humans, measurement of its adducts should reflect exposures over weeks to months prior to collection of a blood sample. This research has not only shown that Alb adducts can serve as biomarkers of exposure, but also provides information about the systemic availability of the reactive benzene metabolites, which are very short lived.

It is suspected that the carcinogenicity of benzene requires the transport of active metabolites, particularly hydroquinone, from the liver (where most metabolism occurs) to the bone marrow (where damage occurs). The UNC research demonstrated that levels of the adducts BO-Alb and 1,4-BQ-Alb were significantly correlated with benzene exposure among occupationally exposed subjects (exposures ranged from 0.7 - 47 parts per million [ppm] among exposed workers). This indicates that both 1,4-BQ and BO are available for binding to serum Alb in humans exposed to benzene and that 1,4-BQ-Alb and BO-Alb can serve as long-term biomarkers of benzene exposure. In addition, the results indicate the saturation of cytochrome P450 enzymes begins to take place at about 1 ppm, a level much lower than previously thought. This has important implications for the assessment of risks associated with benzene exposure. The study also showed that metabolism decreased with the age of the workers and that cigarette smoking significantly contributed to the systemic level of BO and 1,4-BQ.

By developing a comprehensive set of benzene biomarkers, the UNC researchers plan to systematically explore benzene exposure-biomarker relationships over a wide range of occupational and environmental exposures . Ultimately they will study the magnitudes of inter-individual variability in human metabolism and evaluate associations between biomarkers and genotypic expression of several enzymes involved in benzene metabolism. Ultimately, these studies will provide information with which to gauge human metabolism and variability in the critical range of benzene exposure below 10 ppm.